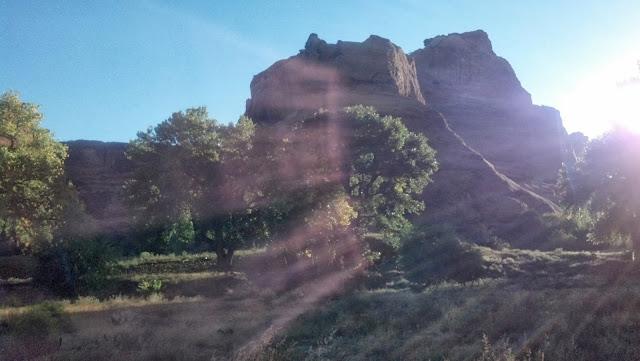 
«Ya'at' eeh. As is Navajo tradition, please allow me to introduce myself.»

Shaun Martin doesn't speak like everyone. Tall, calm with vivid, fiery eyes, you couldn't miss him in a crowd of hundreds. He stood proudly in front of the runners, and went on to recite his name and his family background, in Navajo language.

«What I just did is state my name, my clan and my origins. I started by saying Ya'at' eeh. Translated to English, it is a salutation which basically means that you and I, we're good».

I felt immediately at ease. I'd traveled to Navajo Country with my friend La Mariposa and we'd arrived in Chinle, Arizona, just as the sun set over the distant horizon. The sky is large, here, the land is vast and the air is crisp. Sitting in an outside amphitheater, surrounded by runners and listening to Shaun, I was right at home.

Canyon de Chelly (promounced «De Shay») is a place of legends. This space is sacred for the Navajo, and its access is strictly prohibited to anyone unless their clan lives inside the tall red rock walls. Visitors and tourists may glance at it from top lookouts, in the distance. As a world first, on October 12, we runners would have the immense honor of being allowed inside the Canyon and the great privilege of running its entire lenght.

After an evening of connecting with participants and organizers, where my imagination took flight with canyon legends and my heart filled with a deep sense of kinship, we went to sleep for a couple hours among the distant howls of the coyotes and the neighing of the wild horses. The next day, before first light, we made our way into the dark to a warm bonfire where a traditional breakfast of blue corn mash was awaiting us.

There, in the biting cold late-night breeze, gathered in a circle around the fire, we participated in a prayer to the new day and received an intimate blessing of cedar smoke, from a shaman who spoke to all in a mix of Navajo and English.

«You are about to perform a sacred act in the Navajo culture, called Dàghààh. Your footsteps will touch the earth while the sky awakens and sends its first sunlight. As you enter the mouth of the Canyon, the walls will slowly rise; this represents Mother Earth's arms opening to invite you, then rising up to take you to Father Sky.»

We left the warmth of the fire and took a couple steps to the starting line. Shaun stood at the front. «While you travel inside the Canyon, you are welcome to follow Navajo tradition and holler out to your heart's content. The more, the better. Your howls will echo along the rock walls and be heard from a great distance. Canyon residents and visitors to the rim are going to witness a very rare, awesome display of running today.»

Without any need to say more, both Shaun and the crowd united in a huge, wild, primal howl and the runners burst out in the early light. The moment was unique, magical, electric. A long line of awe-struck runners formed as we slowly left the low sand wash and entered the Canyon. Every step took us further in, swallowing us whole in unspeakable beauty.

As the rock walls rose around us, so did the very first sun rays. They painted the sky a deep blue, without a single cloud to cut through. The Canyon floor remained dark and mysterious for long moments before the light was high enough to spill from the rim, splashing vivid swaths of red, orange, yellow and white on the sheer cliffs and revealing ancient drawings and petroglyphs of prancing horses, wild deers and other traditional symbols scattered from low-hanging ledges up to unimaginable heights. 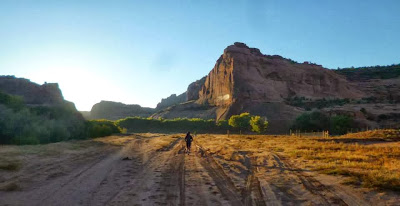 I crossed the path of another runner, Trevor, whom I associated right away with the strength of the Great Bear. Joyful and soft-voiced, he shared many miles with me and his vision of running as a way of enlightenment. Many words and footsteps later, we were running together as brothers.

To the sound of wild howls and excited shouts, we kept venturing further inside this low valley at the bottom of the high plains. Canyon de Shelly twists and turns, and takes you in different directions as you go. By doing so, it offered me dozens of mesmerizing sunrises that morning. Each one unique. Each one imprinted in my soul forever. This is a place of undescribable beauty, to which no word can truly pay tribute.

After slowly parting from Trevor, my journey took me from sandy washes to creek crossings to cliffsides, along Puebloan cave dwelling ruins that date back to thousands of years and the traditional houses of modern-day clan members who live in this marvel of our world. With many footsteps behind me in the sand, I made my way to the deepest end of the Canyon, where its grandest jewel lays. Spider Rock stands straight, hundreds of feet in the air, like the giant needle of a timeless sundial. From the first moment I rejoiced to the sight of its tip to the instant I humbly passed at its very bottom, at least half an hour had elapsed. I lifted my head and gazed at its peak, in high reverence, then left the sandy grounds for the red earth of the single track that climbs all the up to the top.

Bat Trail marked my meeting point with sister runner Wendy, a cheerful Boulderite who was more than excited to tackle the great climb to the rim. Strong and nimble, she made fast work of the steep rocky trail while sharing stories of happy travels and inspiring moments. We ran as one, reaching the top in what seemed to be mere minutes.

We were welcomed at the summit by smiling aid station staffers who made sure we took a moment to turn around and breathe in the astonishing wide view of the Canyon we had just traveled. In the late morning sun, the whole valley was glorious with green patches cutting through a sea of sand, walled in by swirling, multi-colored cliffs. It was unbelievable.

I spent many more miles with Wendy, sharing stories, snacks and laughs. While the descent and first miles of our return felt breezy and exhilarating, the second half of the way back started to take its toll as the heat rose, the deep sands made our feet roll and the creek crossings filled our shoes with heavy, caky mud.

I found myself in meditative solitude again, but slowed to a walk while I was trying to revive my body and refresh my legs. My spirit, unaffected, was soaring high and wide. The last miles of my journey proved the most taxing and difficult, as my feet seemed to sink in the loose sand without the ability to push off. Progress was slow, but my resolve was strong. I kept moving forward, taking advantage of many marvelous sights and noticing details that had escaped my attention earlier.

As the arms of Mother Earth slowly lowered from the Sky and reopened to release me to the celebration of an incredible adventure, I had a moment of sadness for leaving this sanctuary of magic and wonder. As I've done before, I left a part of my soul there, but took a piece of this treasure with me in return.

I came out richer than I went in, humbled by a run among the Ancient Spirits and overwhelmed with the encounter of yet another clan in the world wide tribe of The Running People.

Coming to the final line with finishers and spectators screaming my name and cheering, I stopped and faced a beaming, proud Shaun Martin who offered the heartfelt hug of a brother and attached a traditional Navajo turquoise necklace around my neck.

Peace, joy, kinship and connection were victorious that day. And among the moments of elation and amazement, at the height of everything, a running experience that I will cherish for the rest of my life. 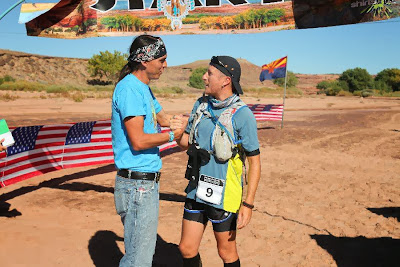 You were right, Shaun Martin. You and I, we're good.