Unreal - The Story Of My First Ultra Marathon 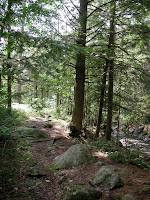 It took me some minutes to actually unlace my shoes, take them off, take off my Injinji’s, clean them up, clean my feet, pull the socks back on, clean up the shoes and put these back on as well. Runners where whisking by, friendly, some winking, some offering a good word. “That’s called a wardrobe malfunction, dude. Happens to everyone. Don’t worry ‘bout it”.

I got back up on my feet and started running again. Almost immediately, I felt the pull on my Achilles again. Grrrrr. I’m starting to hate this shit. I decided that it was useless to try and do anything and that, aside from taking my socks off totally, which is unadvisable in such conditions, there was nothing I could do about it. I refocused on the task ahead, more specifically on the trail.

I had somehow expected that a trail ultra was basically a race along a somewhat even path made of beaten earth, light gravel or other such material, with little rolling hills and some stronger ups and downs. What I was experiencing was radically different. We were running in what’s called single trails, which means it’s no more than an unworked, narrow path going through whatever terrain comes our way. It entailed every possible ground type, from soft sand to hard rock to marshland and everything in between. Some uphills were so steep it was impossible to run them. There were wooden bridges over lake shores. Creek crossings.

At times, I had the feeling I was trying to run a medium-difficulty hiking trail.

The excitement of my early race quickly faded away and yielded to worry. The farther I was going, the more shocked I was at how different the terrain was from what I’d imagined. I had mostly trained on large, light-gravel trails in parks in and around Montreal, not in harsh backcountry trails. I had focused on stamina and endurance, not on strength and agility.

I started to experience a nagging, growing feeling of inadequacy: I was underprepared.

The first aid station came relatively quickly, after a steep ascent. Huffing and panting, I stopped for a quick drink and a bite of something. Conscious that I’d already taken too much time to try and fix my shoe problems, I took off quickly. I decided to “get into my head” and concentrate on the next stretch, trying to analyze as much as I could the surfaces, the visual cues, the good and bad spots.

I was going at a decent pace, enough to make things interesting. Regaining some of my confidence had also had the consequence of giving me some speed. Things were starting to look up a little, at last.

I stepped on a rock I hadn’t even seen, it tipped over and I twisted my right heel until it cracked loudly. My heart stopped. I’d been battling shin splints in my right leg for the past two weeks and I was already concerned that it was not in the best of shapes to undertake the challenge. Now jumping frantically on my other foot, I didn’t even want to put it down; I was certain it wouldn’t hold my weight and make me fall flat to the ground, agonizing in both physical pain and the mental breakdown of knowing my ultra running dreams were shattered.

I lingered there for a moment, and then I reluctantly put my toes to the ground. Nothing. I put down my whole foot. Wow, still nothing. Then I tried the ultimate; I put my weight on my right side. Not only did the foot hold, but it felt strong and unaffected. Flabbergasted, I took a couple steps. I don’t know by what miracle, but not only did it not hurt, the nagging stiffness coming from the shin splints was also gone!

Startled but reassured, I picked up the pace again. There was a series of uphills coming, so I slowed to a jog to keep some energy, focusing on where I put my feet to avoid any further anguish. On top of the steepest hill, I saw a bright beam of sunlight. Coming out of the tree shade, the heat felt irradiating, dangerous. I was now on a large gravel road, baked by the sunlight, with no obvious direction to head for. Wanting to get out of the clearing as fast as I could, I started looking around for a sign of where the course was going. There was an arrow vaguely pointing to the left. “That’s not very well positioned”, I thought, starting to run again. “I hope there’s not too much running in the clear”.

Almost immediately after I began running on the gravel road, I started feeling awkward. I was doubting I had taken the right direction. I was also conscious that every step I was taking, if not in the right direction, I would need to undo, which is probably the last thing you want to have to do in an ultra distance event. Lacking experience and not knowing what the best course of action was, I decided to run a little bit more, waiting to spot the little orange flags that marked the trail.

Several hundred meters further, still nothing. By then, my doubts had doubled. I decided to stop. Standing still, trying not to breathe hard, I tried to listen for sounds of runners, either ahead or behind. Nothing. Little chirpy birds and crickets. I was all alone. Again, fear seeped into my mind. “You only know what’s behind, not what’s ahead. What’s more to see over there that you haven’t seen before? Press on.” I thought the little voice in my head was pretty clever, so I complied. Several more hundred meters later, I finally spot what I’d been direly waiting for: 3 orange flaggies by the side of the road, heading right back into the forest. Immense relief.

As soon as I entered the shade, I got into a very technical, steep descent that didn’t look like any of the trails I had seen so far. Taking every possible care in the world, I finished the downhill and stepped back onto a soft path much like the others I had run on before.

Not 2 minutes later, I lift up my head and see… a runner coming my way! Unable to keep my shit together, I start yelling at him “Do you know if the course double-backs?” He says no. “Have you crossed any other runners?”. His face gets all wearied and he says “You’re the first one”. Floored, I ask “What’s the last noticeable thing you’ve passed?”. “Water station”, he says. God damn it. I’d taken a wrong turn and ran the trail backwards.

Not knowing how to pull me out of my misery, the runner says “Come on, run with me for a bit”. I do for a while, chatting a little, trying to forget how costly my mistake would be later on in the race. Trying to rebuild my confidence. To make things worse, I knew I would only be able to fathom the length of my mistake when I finish my first turn, at 14km, and calculate the difference with my GPS.

So early in the race, that was a hard, hard blow.