I am writing this article in an effort to inform friends and newcomers to the “minimalist running” or barefoot approach. Although it is often presented as a fad that will eventually go away, I am convinced it is a sound method to experience running in a whole new fashion, not to mention one that seems to be free of injuries when it’s done properly. If what your are looking for is advice on various types of footwear, jump straight to the second article.

Part I : What Is Barefoot Running?

Barefoot running is a philosophy and a technique that consists in recognizing the fact that human beings have been running for thousands of years either on their bare feet or wearing only minimal foot protection such as moccasins or various types of sandals.

It also acknowledges that most, if not all, running-specific injuries can only be traced back to the widespread use of commercial running shoes, a very inconvenient fact for a multi-million dollar sporting goods industry. But I digress.

Barefoot running, like the name says, consists in running without shoes. The idea behind it is biomechanical: you can’t run on your bare feet and not land properly on the ground, simply because it will hurt. While running, your body will naturally use a forefoot landing stance, which places your landing foot very close to your body (almost under it), with your knee bent, thus activating the human shock absorber chain that is your lower body. The feedback hit coming from your weight hitting the ground will be dispersed by your arch, ankle movement, knee and hip, leaving only a minimal shock for the body to withstand. Consequently, you will run lighter, more efficiently and with much less stress to your bones, muscles and tendons.

In comparison, when you run with modern specialized shoes, the padded interior and (often) inflexible sole of the shoe invite your foot to land heel first with your leg straight and extended, which results in a feedback shockwave coming straight from the ground right to your spine (and everything in between) with the full force of gravity. Biomechanical studies done by the likes of Daniel Lieberman from Harvard estimate that the difference in shock magnitude between forefoot landing and heel striking is at least seven-fold. Although heel-striking will not necessarily cause injury in every runner, there is empiric evidence that suggests the harder you heel-strike and the harder you train, the more prone to injury you will be.

Here's a video from above-mentioned Lieberman explaining the biomechanics of barefoot running.

So why doesn’t everyone just ditch their shoes?

There are many reasons for that. The first and not the least is that not every shod runner suffers injury. Some runners are enjoying great health and performance using their running shoes and don’t seem to be bothered in any way with their heel-striking form. If it ain’t broke, don’t fix it, right? Then, there is the fact that some shod runners tend to land on their midfoot or forefoot while running with shoes, which gives them the same biomechanical advantages barefooters get. Again, they enjoy healthy running, so why change? And I think they’re right.

Then, there’s the fact that not everyone agrees with what I stated above. Scientifically speaking, there are no substantial studies (although they are coming) done on barefooting that link the running form with the absence of injury or its ability to heal or correct existing conditions. Worse, there are studies being released that establish a link between barefoot running and a new set of running injuries, notably metatarsal stress fractures and achilles tendonitis.

Add to this the hordes of orthopedic specialists, podiatrists and sports doctors who each have their opinions and stances about the issue, the million-dollar-backed advertisement campaigns on each side of the topic and you get one very intimidating mess of contradicting information.

So in short, the whole issue may easily seem confusing to a newcomer, and most people will prefer to go for the well-established idea that running requires high-tech, specialized running shoes adapted to their specific gait and posture. And I can understand that; I would’ve done the same if I had the choice.

Why I run barefoot

I started barefoot running two years ago, when I got caught once again in the same vicious circle of starting to run, getting in better shape, enjoying it, doing a few races, getting more serious about my training, improving my performance… and get injured and stop running. I just couldn’t stand anymore my love for the sport and the frustration I would feel when injuries would ensue. So I started looking for another way. I popped up Google and typed, for a lack of better terms, “alternative way of running”. A couple minutes later, I was staring at my screen, slack-jawed, learning about barefoot running for the first time.

Since I’d been injured so many times before while wearing shoes, it wasn’t difficult for me to make the mental jump into the unknown and actually try barefooting. And man did I love it. In no time, I was back into running, my typical injuries (knee pains, weak ankles, mostly) nowhere in sight. I thought this was too good to be true. I followed the advice I could find about building up progressively, not tolerating pain as a measure of intensity and so on. And I have to say, it felt like a miracle.

From September to the next spring, I built up a new running form from nothing. First thing I knew, I was running a half marathon in early March, and by the end of June I had run five of them, plus other smaller events. I was training 4 times a week steady, getting ever faster, ever healthier. I couldn’t believe my feet :)

An unexpected benefit from this transition was that it also opened me to improve my general health by eating better food, getting decent sleep and overall paying more attention to signals from my body. I mixed yoga with running, too, which proved immensely beneficial for both my mind and my body.

Then I started to think barefoot running had turned me into some kind of unshod superhero. I wore no shoes (ever), except at the office. I ran profusely, always faster, pushing my own limits. I started ignoring pain and body signals because I felt my body was so powerful. 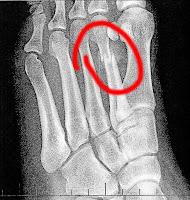 Then, when I really exaggerated, the unimaginable happened: I broke my foot. To be really precise, I suffered a metatarsal stress fracture in my left foot. How did this happen? Well let’s just say I went to race a half marathon after bumping up both my mileage and speed to the point of constant foot pain, while getting no decent rest. I’d literally limped to the starting line, so by the end of the day, I’d turned a warning signal into a full-fledge catastrophe. I missed my fall’s ultimate goal, a marathon I’d been dreaming about for months. I was devastated.

That terrible drawback served as an important reminder: barefoot running will not make you superhuman. The rules of sound training still apply, and you need to be as serious about your rest and recuperation as you are with your training. Whether you wear shoes or not, if you go too fast, too long, too soon, you will get injured.

It took me only two months of active recovery to start running again, and at first I did it with great care and attention. But soon I got caught in my own enthusiasm and wanted to pick up where I’d left: I resumed speed training and augmented my schedule to 3-4 runs a week including a long distance. Before I knew it, I made a bad fall on a patch of ice and suffered an achilles tendon injury. I won’t even begin to try telling you how I felt.

During my second off time being miserable on the couch, I questioned everything. I started thinking that maybe barefooting had gotten me into this trouble. I started reading anti-barefoot and pro-shoe literature in search of answers, and found indeed that the injuries I’d sustained were common in barefooters – but common also in shod runners. My injuries were common among those who don’t train properly.

When I finally got back on my feet and started running again, I changed my philosophy. I decided that I didn’t need to have all my running eggs in the same basket. I researched shoes once again and discovered that some companies were acknowledging there might be something good in the barefoot philosophy, and started integrating some of its principles into their products.

I added a first pair of minimal running shoes in my closet late last fall. Then another. And another. Some I liked, some I ditched. Some I still wear, some I don’t. But over and above everything, what has changed is not so much my closet as my approach to running. No two races are the same, no two running environments are identical and not every training session has to be done the same way.

I realized that, in the true sense of barefoot running philosophy, what I need to do is run with good form on solid feet with a healthy body. What does this mean? It means that no matter what I do or wear, I must always keep a proper running form, which in my case is a forefoot-midfoot strike. My feet need to be strong and springy, pain-free and comfortable. And my body needs to be well-fed, sufficiently hydrated and well-rested. THAT is my recipe for healthy running.

I have been applying these principles for the last couple months and enjoyed, at last, healthy, happy running. I have steadily increased my distance up to a full marathon, and then to ultras. I am not so obsessed with performance anymore and have realized I’d much rather run a couple seconds slower with a smile on my face than break personal records once per season and end it in absolute misery, immobilized on the couch watching other runners enjoy a sunny Saturday.

This is why you’ll see me racing, training or just trotting along in my bare feet, in minimal footwear and in neutral running shoes depending on the environment, the weather, and downright how I felt that morning. Call me a holistic runner :)

In case this is of any importance to you or to your evaluation of what I say in this article, here are a few reference points as to what type of runner I am.

I have done about 12 half-marathons, 4 full marathons, trail ultras and several 10k and 5K races over the course of the last two years. My 2011 season includes two full marathons (Ottawa and Montreal), one ultra marathon (Limberlost Challenge), an XC Trail run and at least 3 half-marathons, plus some 10K and 5K.