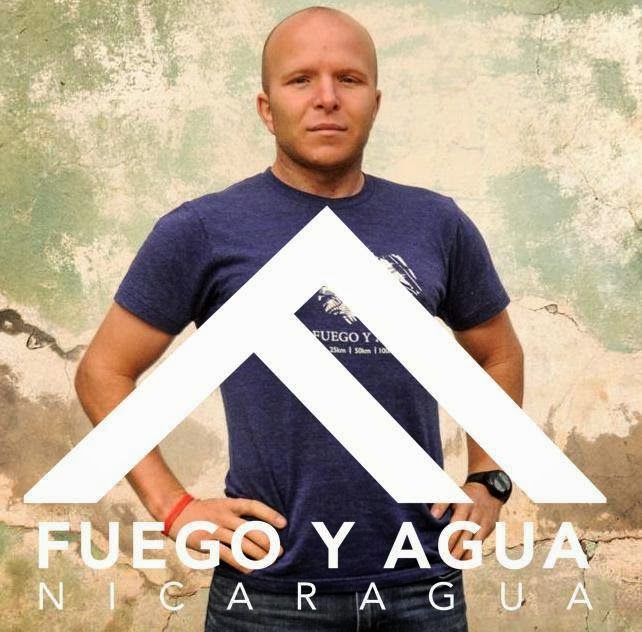 Josue Stephens is not normal. He imagines and designs courses to chew runners up and spit them out, to yank them out of their comfort zone and into dangerous, difficult, uncertain predicaments that will leave them huffing and panting, doubting themselves, looking at each other, bug-eyed, in total disbelief. 30 minutes in.

Where any other race director would fence a rough area out with caution tape, Josue flags it with trail markers, making sure you go through every quick mud pit, thorny bush and steep cliff he can find. Then, he'll run it himself and change it, because he found a new way to make it more challenging. He admittedly aims for high drop rates and would consider his race an absolute failure if everybody finished. His slogans leave little to guess about his philosophy; «Adapt or Die» and «Challenge your Body, Discover your Soul».

Welcome to adventure running. This is ultra, without the training wheels.

The truth is, Josue Stephens is on to something. As one of the very first survival run conceptors, he developed a strong reputation of creating challenges at the very edge of the strongest contestants' mental and physical capabilities. But this has also spilled over his ultra races, and I think he has created a new breed of long distance events that include much more than running a course.

The terrains he makes you travel are not, by definition, ultra material. At Hunter – Gatherer, earlier this year, about 65% of the way was trailless, absolute bushwhack. This time around, Ometepe redefined both my definitions of steep and runnable.

The race starts at water level, on the beach of Lake Nicaragua. Less than 3 little miles to warm up, and you're already at the skirt of the 4,575-foot Maderas volcano, an imposing mountain covered in rain forest. My starting strategy was hard to establish; as much as I usually love to begin my races at the back of the pack, I knew that I wouldn't have a lot of room to move forward in the column of runners. That meant if I was around people too slow for me, my ascent would be long and miserable. Of course, that also meant if I went too far ahead, I'd be slowing down others behind me, and that would stress me out and exert me, because I would try to keep a rhythm unsustainable for my abilities.

I picked a spot close to the end of the pack, but not completely. I drew a mental line between the ones I thought would start out running and those who would walk. We took off and, although I was focusing on taking it very easy, I started to slowly move up the line. When the first uphills came about, I decided to keep running, although slowly, and passed more people who'd preferred to walk.

The trail head to Maderas came quickly, and I didn't stop at the aid station. This put me ahead of the pack a little more, and I was delighted to see that the column I was in on the single track moved exactly at my speed. This took a huge weight off my shoulders, so I spent the early ascent enjoying the company of my fellow runners and glancing at the magnificent jungle trees waking up in the early daylight.

Less than a third of the way up, the trail starts to change from steep to steeper, and you know it won't get any easier any time soon. So the best strategy is to smile and embrace, and I took great joy in my climb. I felt great and I was excited with what laid ahead.

When the treeline starts to switch to a cloud forest, a permanent mist starts surrounding you and everything becomes wet and cooler. The immediate effect is visible on the trail, which changes from rocky, beaten earth to a muddy, slippery path meandering through enormous tree roots sticking out of the ground. This is where you stop using only your legs to propel you forward. The trail is so steep that you need to use your hands to grab on roots and tree trunks and yank yourself up, effectively transforming the run into a full-body workout.

The further up you go, the wetter things become, until you are literally ankle-deep in wet, sloppy mud and you start wondering if this is an ultra run or a figure skating event. My morale was way up, as I laughed my way through the insanely dirty, twisty mud river of a path unfolding before me. Reactions from the other runners around me varied widely, from absolute bafflement to exhilaration. This, definitely, was not your everyday ultra.

When the climb finally leveled a little bit, the trail quickly disappeared under massive fallen trees, whose roots and branches covered everything and forced us to weave our way through, carefully placing our feet on the ultra-slippery wet wood, twisting, rolling over and grabbing anything me could to not tumble down crashing. My heartbeat pounded from excitement more than effort, and I thought this was by far the craziest trail I'd ever been on.

That was before hitting the crater on top, and its aid station. The brave volunteers there had to hike the volcano at night to be there before us, carrying heavy backpacks of food and supplies only to get there and stand in the cold, rainy, windy valley for hours on end. My friend Peter was up there, and I thoroughly hugged him and thanked him before taking off.

Thinking I would run down from that point, it only surprised me more to get to a rock face, a mere couple hundred feet away from the aid station. I stood there for a second, facing the pure, vertical, mud-covered wall and wondering where in the race briefing I had missed the part about the importance of being a rock climber. Doubtful I would even make it to the first of several ledges, I started grabbing and pulling and pushing. To my great astonishment and delight, I was able to climb at a decent speed and get a grip on very little steps (thank you, Saucony Kinvara Trail!). With a grin now larger than my face, I put my heart into it and heaved and ho'ed until I could stand vertically on my two feet again.

Now several hundred feet above the crater, I went on to the next challenge, called the Jungle Gym. It's actually quite impossible to describe it accurately, and chances are you simply wouldn't believe me. But let's try anyway.

Take the steepest downhill single track you can imagine. Drench it in permanent rain and mist, until it becomes no less than a 2- to 18-inch deep river of slick volcanic mud. Now slam the trees down so either their branches, their roots or a combination of both block the trail completely, forcing you to climb up and through as you descend pitches sometimes higher than yourself. This stuff, I yelled to the runner behind me, makes Indiana Jones look like a prissy wimp. It is raw, it is dirty, it is hard, and it is the absolute best trail segment I have ever been on in my entire running life. Pure adventure.

And so I monkeyed on for several hours, finally coming down Maderas ecstatic, filthy and absolutely elated. I had successfully ran up a volcano, bushwhacked through the jungle, rock climbed a muddy cliff wall, sloshed through knee-deep mud pits and snaked through a forest of slick branches and roots. I felt like Tarzan. On steroids.

I emerged out of the trail and onto a road, made a quick stop at the aid station and went on my way. I expected to follow the rock-covered dirt road for a while, then swerve off some trails and be back again, maybe skirting the fresh pebble beach by the lake. I was probably already delirious and forgot that this is a Josue Stephens race, where every segment presents a challenge. I called this one the slow-roast.

As the miles were piling almost as much as the mid-day degrees, I eventually realized there would be no fun segment off that road and not much shade to shelter me from the blistering tropical heat. Runners around me slowly turned into zombies, and I knew I didn't look too good myself. I got kinda bitchy, too, which is out of character. But I couldn't help it. After the high on the volcano, that was an unexpected, unwanted low point and I felt like I wasn't about to come out of it.

Luckily, I got to the next aid station just in time to stumble upon my friend Margaret, who didn't look in any better mood than I did. So we joked about it, I pulled her by the sleeve and, nodding back at the road, suggested we «get the fuck outta here».

Margarita, as I affectionately called her that day, kept my mind together. My poor friend had to endure much more whining and moaning than I care to admit, and I'm not proud to have lost my positive attitude somewhere along that dusty, rocky road. But there was no avoiding it; although I understood this, too, was a challenge, I was hating it and would've gladly turned my heels around and done the volcano a second time instead.

With half-fried brains and not much kick in our step, Margaret and I covered what felt like a mammoth distance, a little over 30k of unadulterated misery. But eventually, like all things, if you keep at it, you'll see the end. After hours of great conversation, all-time lows and great laughs, too, Margarita nudged me and nodded her head to a chalk arrow on the road, pointing back down to the beach. It gave me wings.

We kicked up the pace and started running, picking up our friend Ian on the way and trying to coax Zoli and a nice Brit girl I'd ran with earlier to join us for the last bout. As the finish gate was approaching, I reflected on a day filled with a mix of absolute elation and total misery, and how that run had made me go through so much. And helped me get a little better. A little bit like life. A little bit like challenging myself, to see what comes out on the other side. That's what Josue's on to. Adventure running.

He throws in the crazy running.

You live a real adventure. 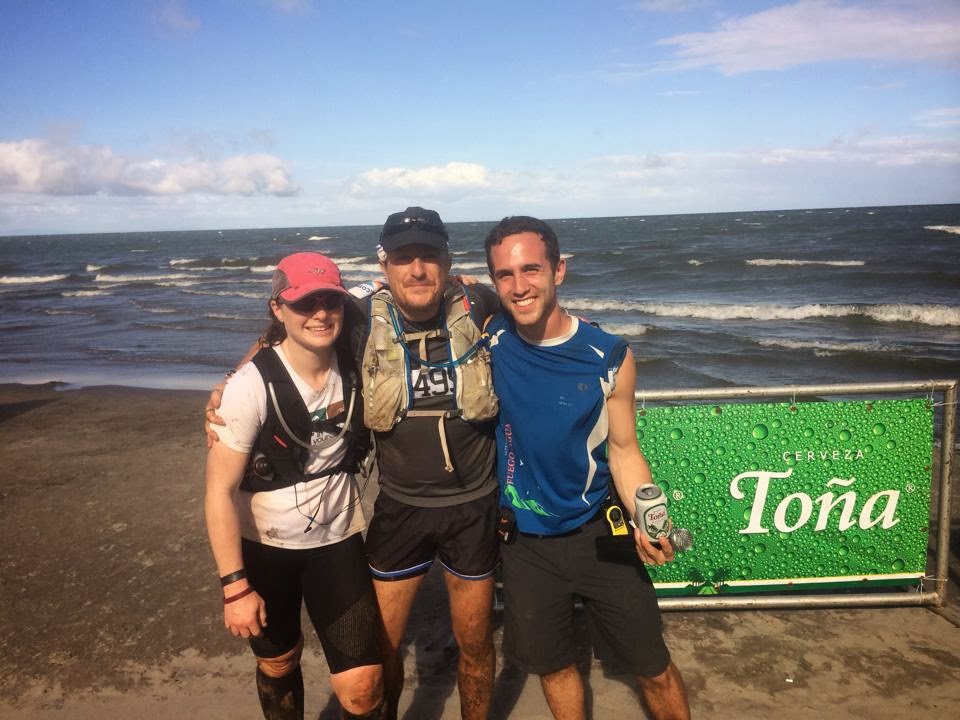