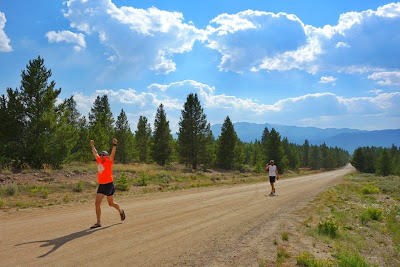 After the Beer Mile oath is taken, there is no backing out. I started regretting getting suckered into this after about 3 gulps of my first beer. See, I can’t chug, and I can’t run, at least not quite like Sweeney, Meissner, Powell, Tyler and pretty much everybody else in the field.

Everyone was on their way to their first lap, and I wasn’t even at half my can of Tecate. Luckily for me, this dude Leon couldn’t chug either, and a steady stream of foam was dripping down his long ZZ-Top beard while we were exchanging empathic looks of mixed amazement and pity.

I let out an obligatory loud burp, threw the can to the side and took off. My belly bloated so badly, I thought it would rip open and show everyone the ginormous burrito I had less than an hour before this, adding dumbness to my stupidity. I tried to start running, and my body rapidly reminded me we were in Leadville, at 10,200 feet of elevation, where running is already hard enough that you don’t need to make it any tougher. I slowed to a jog.

At 1/8th in the mile, I had already decided I wasn’t going to see this through. With great eloquence, a couple hundred feet from crossing the line for my second beer, I let out a loud “Fuck this”. However, I discovered that my refusing to quit is stronger than my common sense or my self-preservation. Before I even realized it, I was popping my second can open and making a mess of myself.

I semi-hobbled my way to the turning point, not even trying to look like I was running this. I turned around, already feeling sorry for myself because I had only half of the job done, and I was ready to check in at the ER, the AA or anywhere that would get me out of here.

It only got worse. At beer 3, my body simply refused to drink. Every sip I forced down seemed to pile up a couple inches below my throat, and it wasn’t long before I started gagging, spitting and doing other things better to stay unmentioned. I was getting ever closer to a dreaded, gigantic barf that would only have me drink an extra beer and run an extra loop. Yeah, these are the rules.

It was largely evident, at that point, that I would finish well behind everyone else, if I finished. But that didn’t matter. I kept drinking as best I could, threw the can to the curb and got on my way. This time around, there was no running for me. I could barely walk and had bloated to the point that my whole chest was hurting really bad. I needed to burp, but couldn’t. About half way to the turning point, I crossed my friend Mike Miller, who didn’t look like he was doing too well either. “How are you?” he asked, looking a bit concerned.

Instead of an answer, what came out of me was the most beastly, cavernous, gigantic, otherwordly mix of a scream and a burp. I christened it The Scurp. It was terrifying and amazing at the same time. It was humanity at its worst and its best, trash and art intertwined. It was beautiful. Trees around me fluttered. Time stopped for an instant.

Uplifted by this unexpected moment and by my newfound lightness, I resumed running. I turned around, got back to the line, popped open my 4th, managed to somehow gulp it down, then took off just when the last runner was making his home stretch. I proudly assumed my DFL status and hobbled along. Sweeney had long finished and decided to further torture my sorry ass by doing a live video interview, in which I hardly pronounced more than 3 words. But the finish line was coming, and I started savoring victory, added to the burrito-scurp aftertaste. I was cheered and welcomed, raised my hands up in the air like a true alcoholic champion and crossed that line for a final time, swearing I was never going to do this again...

... While asking when the next one would be.

The Beer Mile was performed by highly-trained professionals in a strictly-regulated environment under the supervision of international elite runners. Do not try this at home.
Posted by Flint at 3:52 PM