I call him Jack, and he’s my friend. It’s strange, because his name isn’t really Jack and we don’t really know each other. He appeared into my life as a Facebook runner, a tall guy with a big smile on his face. He would always have something nice to say to encourage others, or a thought to share. I didn’t know at the time, but Jack has a secret.

His real name is Jacques, but that’s not the punchline of this story. And although what I am about to reveal is amazing in itself, it’s still not the secret I discovered.

In 2009, Jack went to the doctor. He wasn’t feeling well and he was preoccupied, because there was a strong history of heart disease, diabetes and early death in his family. In order to perform his diagnosis, the doctor had to weigh him, but he couldn’t. His scale maxed out at 365 pounds. So he sent Jack to a slaughterhouse, where they had industrial-grade equipment for shipping pallets.

He laughed it off. Big bones. But no amounts of jokes or scoffing could push away a thought born in his head, squeezing back into his car on that fateful day. He was going to die. 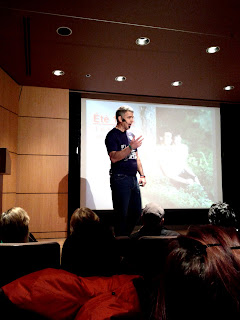 As I sat in the conference room tonight, just before Jack’s presentation, I couldn’t help but look around me. There were all sorts of people. Some obviously in great shape, others not so much. And a couple round shadows, keeping to themselves, staying as far back as humanly possible, trying to blend in with the walls or the furniture.

The presentation didn’t start with trumpets of triumph; it started with thanks. A heartfelt video, a stream of pictures from people who inspired him along the way. Jack didn’t even stay on-stage for it, because he says it makes him too emotional. People in the room started wiping tears, already.

This wasn’t an easy place to hide your emotions. And when I think back, this was actually the place to express them. Because emotions are what set Jack on his formidable adventure towards health. Deep wounds had made him build a steel armour, and the passage of years had made him forget himself completely. He had to travel back from an almost complete oblivion.

And that’s precisely what he did. Step by step.

Almost 3 years and 223 pounds later, Jack tells the tale of the transformation of a body, but also a discovery of himself, complete with his goofiness, his shortcomings, his honesty and his reacquired dreams. Through stories of his reconstruction, and among pictures of his 5k’s, half marathons and IronMan, one phrase struck me the most.

“Life is a gift and it deserves to be treated with great care”.

As he completed his amazing story, he turned to the crowd. Naming several individuals and making them stand up, he celebrated their achievements. Pointing to others, he shared the inspiration he received from them. And that’s when I discovered Jack’s secret.

Out of the furthest corners of the rooms, the round shadows came out of hiding. Emerging from their own oblivion and maybe mustering the courage for the very first time, they came forward and spoke out, about their difficulties, their fear and some even about their shame. And in the midst of the people Jack had gathered, tonight, they found ears, hearts and encouraging words.

It’s not the indisputable fact that he has the heart of a true champion, and not even because he accomplished such an amazing metamorphosis that Jacques Aubin is an extraordinary person. It’s because somewhere along his journey, among his own hurdles and demons, Jack discovered how to inspire others.