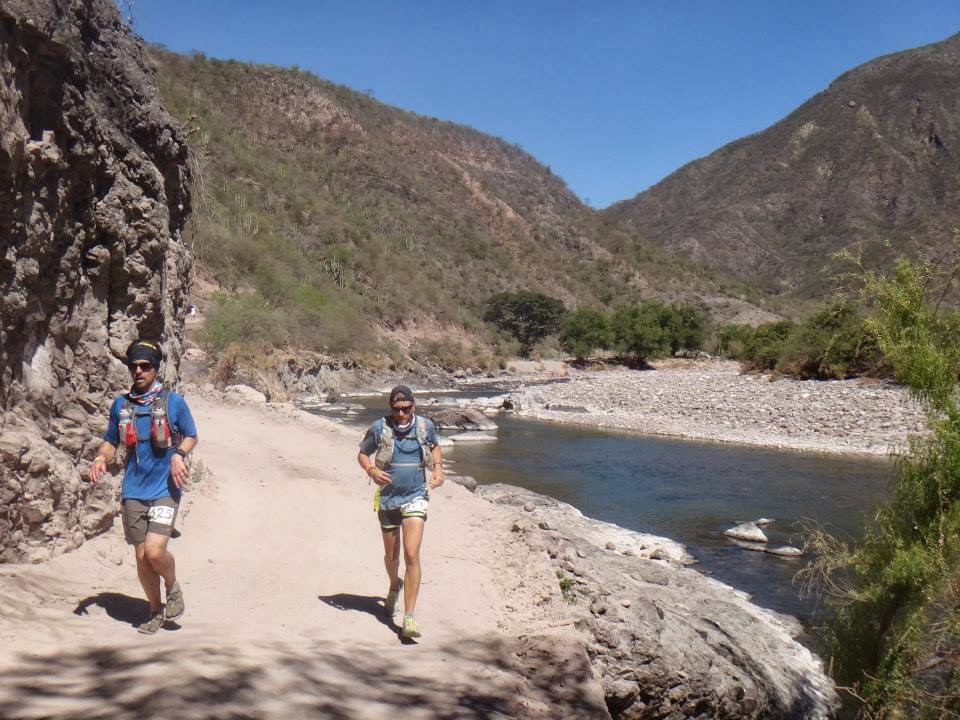 It seems every time Tom Norwood shows up at a race I'm running, something epic happens. Last time around, we shared an unlikely lifetime achievement after crossing the finish line of Josue Stephens' Hunter Gatherer 50, stride for stride, in overall 4th place and as 2nd men.

I can't even start telling the story of Ultra Marathon Caballo Blanco 2014 before I make sure everyone remembers Tom's feat from last year's race. He left a major mark upon the Copper Canyons running lore when he rose up from absolute despair on an Urique sidewalk, after receiving unforgettable words from our friend Luis Escobar, and finished his first-ever 50 miler against all odds. A victory Mas Locos and the ultra running world in general shared in absolute delight.

However, the only that that felt epic, this year, was Tom's stomach flu. After spending the two last days of UMCB race week in bed with a fever and an inability to keep any food in, he didn't look like half of himself. He'd already told me he wouldn't be running; his body felt too weak for the challenge. He'd stay with Margarita, our friend Margaret Schlacter, who was the event's social media journalist, and be the «Official Race Vehicle».

You now can understand my amazement when, at 5:30 AM Sunday morning, I saw him and my friend Scott Smuin show up at the starting line. His colours were back, he was smiling and looked as fresh as ever. «What the hell?!» I screamed, jumping into his arms. «Well, seems like I feel much better. I wouldn't miss this run for the world!».

I decided to take the start with another firend, Marc Seguin, who'd travelled all the way from back home with his Beloved, Shany, and who stood the chance of becoming Quebec's #4 Mas Loco. We'd shared numerous runs together and I was very proud to join him in the beginning of his Canyon journey.

The race started like every other time I've ran it; you're just standing there, smiling, taking pictures with friends and sharing a joyful moment and then every one starts moving. Fast. Before we knew it, we were running down Urique's main street and I was taking off on another UMCB adventure. My heart was full and my smile was wide.

I shared several miles with Marc, until he somehow disappeared at Guadalupe Coronado, our first turnaround point. I guess he stopped for food, and I didn't notice he'd stayed behind until I was maybe half a mile ahead. Knowing he's a strong runner, I had the feeling he'd catch up with me sooner than later. In front of me, in the distance, I saw a very familiar silhouette; my friend Tom, running happily on the rolling canyon hills. Unable to refrain my enthusiasm, I darted ahead to catch up with him.

Tom is a great friend with a powerful, beaming smile. Just running alongside him makes me happy. We had tons of catching up to do, so we started talking enthusiastically while finishing the first loop, down to the bridge. When we reached it, we decided to stay together, as always, and share the whole run.

The climb to El Naranjo was playful and felt short. We ran with several friends and crossed others, cruising fast with the lead Raramuri. They were in a race of their own, but what was amazing is that everyone, from first place to last, was smiling. Running free.

The top mesa at Naranjo arrived quickly, and both Tom and I felt fresh and excited for the fast downhill 10K that lied ahead. We ate oranges and drank pinole, making sure we were fueled properly for a quick-paced, non-stop descent into Urique. Like two kids, we ran down the steep hills feeling like we were flying, revelling in the glorious morning sun and enjoying every moment we could spend running alongside our Raramuri friends.

We agreed to take a couple minutes in Urique. I had to re-lace my shoes and Tom wanted a little bathroom break, so we spent maybe 15 minutes in town under the shade of Mama Tita's front porch. We took off as the late morning sun was rising, along with the heat. Tom was running strong and, for a while, I felt like maybe he'd leave me behind. I felt a little weaker than I would've wished for, but it wasn't too late to avoid a crash. I ate more calories and drank generous gulps of water, and started feeling better and better, all the way to the La Laja bridge, which marks the end of the road and the beginning of the beautiful trail to Los Alisos.

The riverbed section was done in no time and, as we started the steep switchback climb to the trail, I accelerated a little. I felt great and strong, and made sure to tell Tom... who didn't answer. I turned back and realized he had lagged behind a couple steps. His face had changed a little, too. «Are you all right?»

«Take it easy, amigo. I'll wait for you on the top of the hill.»

I kept going, leaving my friend to his thoughts. I was looking forward to a little shade at the aid station on top of the switchbacks, and would use the time Tom would take to catch up to empty my shoes, which had filled with loose sand. My plan worked great and, by the time Tom reached the top, I was all refreshed and ready to go. We still had a rough stretch ahead, the one I call The Oven. A steep canyon wall of red rocks that slowly take in sun rays and radiate them back at the runners.

This is where my friend hit his first wall.

Progress became slow, and his steps got shorter. He felt dizzy and nauseous, but I pressed him on so we would clear The Oven and get to the shade. This probably didn't help, because his energy faded quickly, until the point we had to stop. We took a little breather and tried to start moving again. After several minutes of stop-and-go, Tom gave me the look I didn't want to see.

There was no arguing. His eyes talked the loudest. He was tired, he was sick. He was done. Saddened, I turned and moved ahead, reaching Los Alisos in a couple more minutes. I waited for my friend there, but he wasn't coming. After some more minutes, I took the decision I didn't want to take, and started going back down on my own. I really wanted to finish the race with my fr- «TOM!!!»

I wasn't 100 yards down the trail when I saw him. The Happy Badger, El Tejon Feliz. He who refuses to quit. He was walking slowly, but hell, he was walking! «I'm so glad to see you!!!»

He was still a little pale, but he looked way better. I sat down on a rock by the trail side, and refused to move an inch before he joined me. After trying a couple times to get me going, Tom smiled and promised to take a decent break at the aid station, then come back down to continue together.

We spent the whole way down trying to figure out a way for him to eat and drink sufficiently and to get back some energy for the last loop. This segment to Urique, we agreed, was the stretch we would use to piece him back together so that we could finish happy and strong. Things looked great for a while, with even some running stretches on the road back. But soon enough, my friend was on the side of the road, sicker then before.

«I don't think I can do this», he said, looking defeated. «You stop this right here!», I yelled back. «We're going to do this together, and we're going to finish this together, a'ight?». My failed drill sergeant routine, at least, made him smile and we kept going, slowly but determined.

Before reaching Urique, I started fearing Tom would call it a day and tried everything I could to make him feel better. «Give it a good thought, and tell me something you would really, really like to eat right now.» He gave it a minute and said «well, this little shop in town has watermelon smoothies. I think I'd like that.» «I'm on it!», I yelled, running ahead. «See you in town!»

I got to the shop, happy I'd had the wits to put some money in my running vest the night before. I bought the smoothie and made it back in time to see my friend get to town. He didn't look great, but the sight of the cold drink seemed to make him happy. A lot of our friends had finished their race and were at the Plaza, cheering other runners in. They gave Tom a real boost and made sure we had all we needed for the obvious long haul to Guadalupe and back. At this point, there was no running anymore and our progress was slow at best. But we were moving, and we were together.

It took us several hard hours to get to and back from Guadalupe, with numerous stops on the way. Tom was really sick, all the way, and none of what we tried seemed to make him better. Every step he took was hard, and not a single moment in that last stretch gave him a break. But he pressed on, kept moving and never, ever lost his determination. Badgers, you see, don't ever quit.

As we had done before, we came closer and closer to the finish line, stride for stride. As before, we'd drawn on each other's energy until we savoured the incoming victory. We celebrated the memory of Caballo Blanco, who had brought us together, and we celebrated being alive. We finished in the arms of our friends, exhausted but satisfied.

It was a great day to be out there.

It was an even greater one to share it with my friend Tom.