In this second article of the series, we introduce you to Lee Saxby’s barefoot running technique, or Natural Running. The following explanations and graphics come from the coaching material and a live session with Canadian coach Tina Dubois.


What is Natural Running?
According to the method, “Running” is one of the three biomechanical forms of human locomotion, along with walking and sprinting. As you can see, “Jogging” is not a part of the picture here, and is described as an incorrect – an injurious – movement, only made possible because of standard shoes and their lack of proprioceptive feedback.


What’s the technique?
According to Saxby, there is an ideal way for running, and it applies to everyone. It’s composed of three parts; posture, rhythm and relax.

Real-Life Example
While at Tina Dubois’ coaching session, she took videos of my running, before and after applying Saxby’s method. For the sake of context, I am a self-taught barefoot runner with a 3-year base, who enjoys mostly injury-free running over all sorts of terrains and distances.


Verdict : Head-Chasing, Forefoot Striking Overstrider
My standard posture, it turns out, is not quite perfect according to this method. Admittedly, the head-chasing part is mostly due to my watching the treadmill console, so we won’t pay much attention to that one and blame it on environmental factors. The overstriding, however, is the money shot. I tend to land on the side of my forefoot, a slight bit in front of my center of gravity. This causes an unbalance and makes me stretch my back leg (called “trail leg”) further behind me. 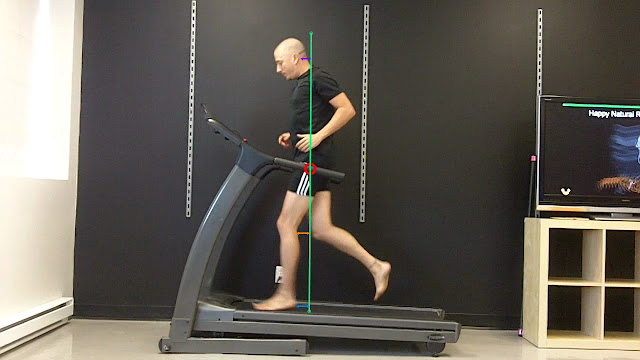 Corrective measures
Where Lee Saxby’s method really shines, in my opinion, is in the corrective exercises it proposes. Nothing complicated here, only a couple routines you can do anywhere, with minimal equipment. here’s a quick rundown :

Corrective measures applied to my… case
Since I have a tendency to slant forward slightly, Tina recommends the barefoot walking exercise. She also insists on my increasing my cadence to 180BPM, using the barefoot jumping exercise and a “metronome” MP3 that I can listen to while training. Last but not least, to take care of my lagging trail leg, she recommends I run stretches while performing the 1-2-Pull exercise. The second video below illustrates both my modified running technique and the 1-2-Pull exercise (notice the “kicking” leg).

Verdict : Natural Runner (!!!)
Although my second posture assessment was made easier by having a metronome beat to run to, I have to admit I didn’t put much effort into “trying” to look the part. I think this is largely due to the pertinence of the exercises, which are both simple to master and easy to practice. 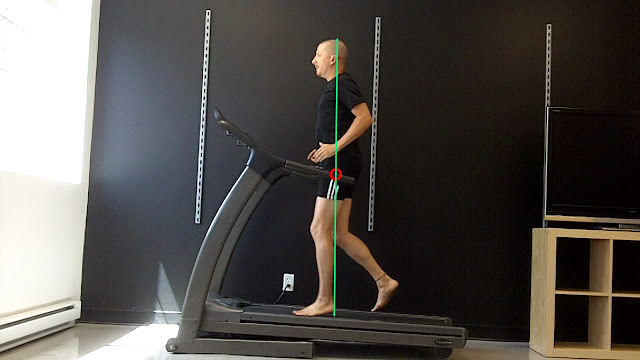 
So in less than 3 hours, under the supervision of Tina, I was able to go from my "standard" posture to a "natural running" form. It required only a couple focused exercises and getting used to a 180 BPM rythm, which felt too fast for comfort but turned out to be close to what I was doing already.


Video 3 : Before + After, a side-by-side analysis

For a somewhat experienced barefoot / minimal runner like myself, adjusting to the Natural Running method was quite a breeze. It seemed like the technique was more difficult to apply for some other "shod" runners attending the session. However, they were probably lacking strength in the stabilizer muscles and had no prior experience of the "barefoot feel", which made listening to their body likely harder. My guess is most of them probably needed only to perform the exercises a couple more times for the posture and the technique to feel more natural.


The next article in the series will be my analysis of the method and what I took away from it, both in theory and practice. As mentioned earlier, I’m inviting you to take part in the conversation in the comments section below. Tina will be there to answer your questions and discuss your feedback.


For a complete run-down of the Natural Running technique, you can visit Tina's official website.