Like The Wind: Born to Run Ultra Marathon Race Report 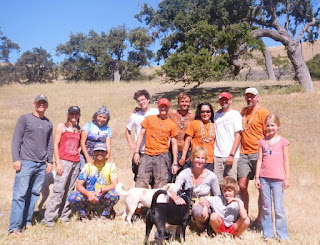 I stand there at the starting line, half asleep and three-quarters frozen. The early morning was bone-chilling after a night that made me shiver in my sleeping bag, under the stars of the East Creek Ranch. I’d only had time to eat a Clif Bar and sip on a warm coffee that Patrick Sweeney handed to me with a pitiful look as the early light was chasing away the intense darkness on the hills of Los Olivos. A hand pats me on the shoulder, reassuring and warm; it’s Maria Walton, fresh as a rose, Guadajuko by her side. I give her a hug, then a shotgun blast tears through the twilight and all the runners head out for the fields.

Life has been a tornado for the past couple months. It all started when I ejected from my normal life to parachute down in the Copper Canyons, thinking I’d spend quiet weeks of running and acclimatizing before my first-ever 50-miler only to stumble on Caballo Blanco and Olaf, travel all over the Barrancas, run hundreds of kilometres and shoot a feature-length documentary. Then I ran a life-changing ultra with a smile on my face, mesmerized by the changes in my body, my mind and my soul. I came back home with a head full of projects and overflowing inspiration, only to find out my friend had gone missing in the Gila and, after 3 agonizing days of anxiety, had been found by a stream gazing at the sky, in peace, his life out of him.

The first steps in the fields feel strange and surreal. I am side-by-side with Maria, my throat choked with emotion. It’s the first time we actually run together. I am still freezing and feel grateful for being on the move, but I have no contact with my own body; no feedback, no sense for how the day will turn out. I chase the thought away and just immerse in the moment; I am happy to be here, to be The Mariposa’s early-race sidekick and to watch Guadajuko dance again. A couple minutes later, we find a smiley Caleb Wilson by the side of the trail and he jumps in with us. His warmth and energy are quite unique and I’m glad I’ve gotten to know him better over the last couple days. He and Maria are family, and I can feel just how happy these two are together.

After Micah disappeared, I had to deal with a very difficult reality; I had never lost a loved one before. I was wandering through uncharted territory, feeling lost and weak, with only my Belle as an anchor. No one around me grasped what profound effect Micah had on my life and the depth of our connection. Very few understood how I felt and, mostly, why. I was afraid some of my passion had died with my friend, that pieces of myself would be lost or broken beyond repair. 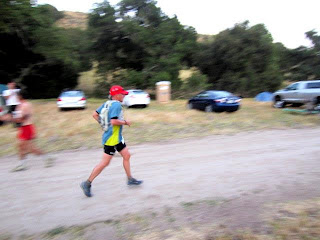 Running in the Los Olivos hills, surrounded by Mas Locos and kindred spirits, was slowly reconnecting me to my recently-acquired roots. As I was breathing the fresh air, I was reminded why this crazy adventure started: I love running. It’s impossible to explain, and doesn’t need to be anyway. There’s just something about it that liberates my soul, that lets me express my true self without artifice, that makes me step out of what I think is reality and into a totally different universe.

Around me, all sorts of creatures pull me out of my daydreams; barefoot dudes in skirts, Randy The Beer Man, an overwhelmingly cool guy named John, Lynette and her hat, people with dogs, my first encounter with Shacky, inflatable dinosaurs, my Lunatic buddies.

By the time I begin to feel awake, it’s been two loops and about twenty miles. The sun’s up, I’m not cold anymore and the beautiful environment starts sinking in. Giant, twisted trees on grassy hills, shadowy stretches under leafy canopies, river beds, high ridges. My food tastes good, the water is refreshing and the grin that stretches across my face tells everyone I meet how glad I am to be out here, to get to run with them on the trails and to share some delightful conversations.

Every time I look at the ground, I see the blue smear of my feet shuffling under me. My heart swells, thinking how my new friend Little Wings, learning about my attachment to the Saucony Peregrine, got in touch with the company and got me a pair identical to that of the White Horse. Not two months ago, I had spent a morning in the canyons sitting under the trees at Entre Amigos with a hotel sewing kit, therapeutic tape and repair patches for my inflatable mattress to try and fix my friend’s shoes, a miserable pair of size-12 Peregrines so beat up they had gaping holes and tears all over them. Three hours and change later, with a mischievous grin, I handed him back his shoes, all sewed and patched up, ready for the race. His face melted into a big wide smile and he hugged me, simply saying “that was way beyond the call of duty”. Looking at my own two feet now, I can’t help but think how well I run with my horseshoes.

Wooaaah. I was yanked out of my memories by a runner who literally flew by, his swift feet barely touching the trail. Seeing Patrick Sweeney going at it is quite exhilarating; he runs like the wind. I am both amused and discouraged by the fact that he just lapped me, meaning that he is either lightning fast or I’m freaking slow, or probably some happy mix of all that. I start laughing and barely have time to send him my love before he disappears in the trees.

As the morning gives way to a sunny afternoon, the heat starts to rise significantly. The next two loops prove to be difficult, with a lot of walking and a generally low energy level. Amidst the increasing blur of my heat-induced lethargy, an oasis of cool: Wild Bill’s aid station. I get introduced to the concept of the ice jacket and leave Bill’s tent in awe at my body, gone from shimmering to shivering in just about 3 minutes flat. Call it Badwater magic.

My 5th loop becomes a crazy realization that I am way ahead of any prediction I could have made for the race. My horseshoes are working wonders; if I keep it up, I’ll pass the 50-mile mark around 11 hours, shattering my Copper Canyon time by over an hour. I get excited. My shirt flaps in the wind I create, running the downhills of the last section. 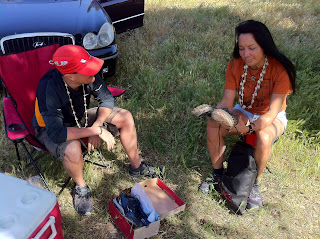 This ain’t no standard shirt, either. The night before, upon reuniting with Maria, she pulled me apart and said “I have something for you”. She sat with me and told me again what a special moment this year’s CCUM had been for Micah, for her and for everyone who shared these special times. We wept at his memory and the thought of not ever running all together again. Then, from a plastic bag she’d brought, she pulled one of Micah’s running shirts and handed it to me. “I thought you should have this”. By some miracle, the shirt fit me – I’m about half the size of Caballo – and I decided right away I would be running in it.

I crossed the start/finish at my 50-mile mark just under 11 hours, 15 minutes, a solid hour better than my CCUM time. I was energized, excited and overwhelmed with many feelings. Friends who had finished and were now sipping beer and eating BBQ were cheering me on, the ambiance was joyful and festive. Maria caught up with me just as I was leaving. “I can’t believe this!” I told her, still not sure any of this was real. She smiled, looked at me with deep eyes, nodded and said “He’s giving you wings”.

I started my last 2 loops with tears rolling down my cheeks. I was feeling a mix of loss, pride, amazement, hope and longing. I decided I would run the whole 2 loops with my friend right next to me. “Wait for you at the ridge” is what echoed in my head. Oh, well. I should’ve known better; you never tell The Horse what to do :)

Having been able to take in plenty of food and fluids all day, my home stretch did not prove as painful as it might have. Only the long climb that makes up most of the first yellow loop (the second half of the full course) proved taxing on my tendons, but otherwise things were looking good. My last pass at both Nancy’s and Wild Bill’s aid station were high points, with plenty of thanks, laughs and hugs for the road.

As promised, I was welcomed on the ridge by a gust of wind. It made me lift my head for a bit and sink in the beautiful views as the evening was setting. I was enjoying this. I started thinking that maybe, maybe, if I could make a really good descent, I’d make it by daylight. Me. Running 100K and coming home before sunset? That was just insane. Insane… enough to be worth trying.

I took off at the ridge junction and picked a good pace. My legs followed. That grin became a huge smile and I released what remaining brakes I had. What a feeling. Flying downwards in the lowering light after a full day of running. I felt good. I felt alive. And I felt free.

I passed the start/finish not wanting to stop, because I still had a 2-mile out-and-back to complete my 100. I made the race official chase me as I was taking off, slowing only to yell out my bib number. I was on flats now, but refused to slow down. I ran the whole stretch, furiously chasing the underwear mannequin with a mariachi hat that served as the 100K marker. I finally saw her, slapped her on the butt and turned away.

The last possible rays of light were still clinging to the sky as I was frantically trying to reach that line for one last time. It was getting dark, only the sky remained a shade of blue.

I couldn’t believe it. There, in the field, was Maria. She had taken off from the aid station and was chasing me. She was bringing me home. I couldn’t say a word, I just grabbed her hand and kept running. We closed in. She probably woke up the whole encampment with an Apache war cry as I made it to the finish line, screaming “Does this count as Make it by Daylight?” 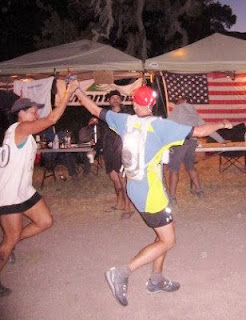 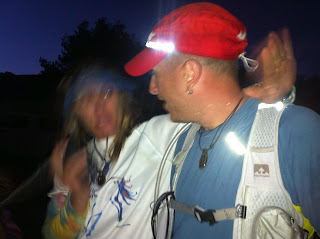 At the microphone, Luis Escobar welcomed me in. “Francois Bourdeau, you Were Born to Run”.