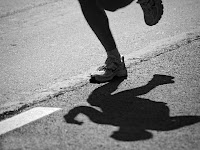 It is one solid song after the other. My day started with a befitting “Run, Lola, Run”, save the Lola part. Then Rise Against spilled their guts out, like only they know how to. By the time the first seconds of Bad Religion’s “Sinister Rouge” had elapsed, I was already at full speed.

Running to work makes the world different. While people are sitting in their cars, half-awake, I dash past them at traffic lights, zig-zagging between dozens of urban obstacles, music blaring in my ears. For twenty-five minutes each morning and twenty-five more each night, I’m an urban runner, a strange city-dwelling animal that attracts bewildered looks from pedestrians and drivers alike. I am my own means of locomotion.

I don’t hear the horns and sirens that fill out the usual sound environment. There are only my favourite bands, playing my favourite songs, never in the same order. Music, and the distant pounding of my feet climbing up and down sidewalks. I breathe heavy and push myself a little faster. I’m flying.

On rare occasions, I mix paths with another animal. A lone runner gone for a little breather in the morning or, even less often, another commuter. Almost every time, the scene plays the same; just as we’re about to cross, our eyes lift and stare for a suspended moment, then we both grin from ear to ear. I then keep going, in the absolute delight of having shared a unique moment with a pure, like-minded, stranger.

As soon as my destination is in sight, I know my wild moment is about to end. As my legs slow down and I prepare to climb the stairs to the main entrance, I don’t try to recompose or look fresh. I linger in my animal instant and enjoy the drips of sweat that pearl down my face. I try to hide my amusement as I cross my clean coworkers, all dressed up and smelling of perfume or aftershave, fresh out of the same cars I was dodging at traffic lights only minutes ago. Some don’t even recognize me… or at least act like it. What would they say, anyway?

In that moment, even more than usual, we have nothing in common. They’re just out of a stressful commute, filled with exhaust vapours, braking lights and bad coffee in insulated mugs.

I’m just in the door, still excited of my morning’s obstacle course. Smiling.