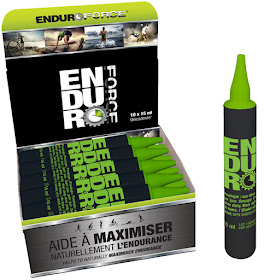 Introduction
When you’re an endurance athlete, it’s really hard to carry your healthy eating habits into your running fuel and hydration needs. A vast majority of foods, drinks and supplements use highly-refined sugars, such as maltodextrin or glucose-fructose, to trick your body into high gear. For health-conscious endurance enthusiasts, this is less than optimal, to say the least.

Thankfully, there are a growing number of endurance fuels which use only natural ingredients, starting of course with Mas Korima, a collaborative enterprise I’m very proud to be a part of. There are also other new and innovative products out there, and Enduroforce is definitely one of them.

Enduroforce uses maple syrup and spirulina, mixed with sea buckthorn and ginseng. That’s it. Four natural ingredients, nothing else. I like that a lot and, after sampling the product, got enthusiastic about its effects, too.

Testing
The idea behind Enduroforce is to be a tonic, a natural stimulant that forgoes the use of caffeine and taurine and that helps maximize endurance. The ingredient mix is rich in antioxydants, vitamins and minerals, comes in a tiny dose of 15ml and still packs 40 calories and a gram of protein.

Upon trying it the first time, I was expecting a boost comparable to the use of a gel, or maybe like a shot of espresso. This is not at all the effect of the product. It didn’t change much in my intensity; what it did is to increase my awareness and focus, and mostly to rid me of the impression of fatigue while I’m running. It’s a subtle effect, but an important one when going on multiple-hour endurance runs.

Compared to a straight shot of maple syrup (which is what I now use as a gel replacement as well as the sweetener for my pinole mix), Enduroforce doesn’t pack a big punch, and I don’t think it’s its intended purpose either. As a tonic, it brings a balanced shot of stimulation, nutrition and supplementation that really starts to shine in the long run.

Taken 45 minutes before effort, then subsequently about every 2 hours, Enduroforce maintains my energy and focus and decreases my perceived effort without playing yo-yo with my sugar levels.

Analysis
Taste-wise, Enduroforce takes a bit of getting used to. Personally, I don’t mind an “exotic” taste, as long as it’s not too strong or pungent. I won’t go as far as saying Enduroforce tastes good, but I got used to it pretty quickly and the fact that it’s fully natural weights a lot in my personal balance.

My biggest qualm about it is the strange little package it comes in. It’s a small plastic tube with a break-off tip which isn’t easy to manipulate at first. Furthermore, when you’ve used the tubes, they often drip into running vest’s pockets and leave a sticky little mess. Lastly, I’m not a big fan of single-use plastic and would love an option of a large container and reusable screw-top type “shots” to save on trash and skip the mess all at once.

Conclusion
In my opinion, Enduroforce is a good element in an endurance nutrition mix for the health-conscious athlete who wants to steer clear from the chemicals and highly-processed compounds that make up most fuels out there. Used side-by-side with your liquid and solid nutrition of choice (Andale! pinole and Korimalitas energy bites in my case), it can help you perform well without a nagging feeling of constant effort.

The material for this personal review was supplied by Leo Desilets / Enduroforce free of charge. Disclosure: I am part of Enduroforce’s ambassador team.