Jim Walmsley is a Champion 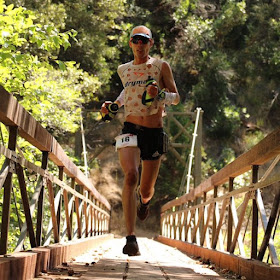 Canyon de Chelly, last fall. I had just finished setting up my little dirtbag camp (sleeping in the back of a rental Ford Escape with The Dragonfly) in beautiful Navajo country when a car pulled in our spot. It was pitch dark, and some guy stuck his face out the driver’s window and asked “Is it OK if I park it here?”.

Two guys stepped out and we shook hands. “Hey, I’m Jim.” “Hi, I’m Myke.” And that was pretty much it. They got set up in the back of their car, just like us, cooked a little bit of dinner, and came to sit down at the Miller’s Casitalita. And you know what was really special about it all? Absolutely nothing.

We all took a seat and started chatting among ourselves. I found out that “Myke” was a photographer, that he traveled quite a bit, and that he documented Jim’s runs. My friend Nico was there too, and it was cool to spend a little time and have a beer before the grand day tomorrow, one of the most amazing runs an ultra runner could wish for. Everyone shared stories and like every eve before an epic ultra, it was relaxed and fun.

Walking back to our car, Julie told me “Wow, that guy I was talking with, Jim, turns out he’s just ran a world-record Grand Canyon Rim-to-Rim-to-Rim just a couple days ago.” I had actually sort of met him before, running Mesquite Canyon in Arizona. He flew down a trail at an impressive speed, and I thought he really looked like Scott Jurek with his curly hair and his long legs. Julie was impressed. “He’s just this super casual dude”, she said, “He didn’t mention anything about his feat until I started asking questions.” Champions tend to do that, I thought to myself.

The next day started before sunrise as we made our way down to the sacred fire and shared the Dag’ha ceremonies, where elders and tribe members help prepare the runners for the long day ahead. I asked Nico where Jim was. “Oh, he’s just here for the experience”, he replied. “He’s not running today.”

I wished him good luck on what would turn out to be a pretty fantastic day for him (Nico flew like the wind and won the 2016 run) and set out on my own adventure with Julie, who was experiencing her very first ultra. It was an amazing day for us, too.

At the midpoint, atop the magnificent canyon after a tough climb, I got into the aid station with 1,000 things on my mind. Two hands eagerly extended at me. “Dude, do you have any trash I can take care of?” I lifted my eyes and there he was. “Are you eating well? Have you got enough to drink?”. Jim Walmsley was helping runners out at the aid station, and he wanted to take my trash to the garbage can. He was happy and excited and dedicated and he made me so proud of my sport.

“When was the last time you saw a sports superstar take care of some random guy’s trail trash and make sure he’s doing OK?”, I remember telling Julie, on the way back. A real champion will do that, I again reflected.

I never told this story until today, because I’m convinced Jim didn’t do this to get publicity or gratification. I’m convinced he did it out of his love for running and to share a special moment with the people who, he knows, “get it”.

So when some of these running people started speaking negatively of him after the Western States last weekend, it really bugged me. They accuse him of being brash. They find weaknesses in his strategy. They say all sorts of things, from the comfort of their little certainties, like they’ve had a front-row seat to Jim’s career all along. 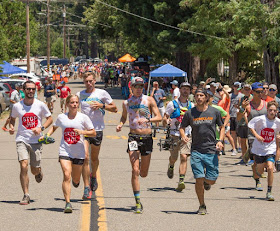 The same people who would have written the exact opposite, should Jim have made it and won the race and smashed a course record. They would have lauded his boldness, they would have talked about every little bit that he’d done right. And that, too, is pissing me off.

I’ll be first to say, I don’t know Jim Walmsley that well. But I’m the kind of person for whom actions speak louder than words. And after seeing how he behaves and the respect he’s garnered from many ultra runners in the community I know and love, I’m taking his defense and I’m standing with him.

He went out there and he gave Western States his absolute best shot. He was convinced he could win, and he was unafraid to say it. And maybe some people didn’t notice, but he’s also unafraid to talk about despair and depression, of failing and mistakes, even of wanting to die. And then finding a way. Champions tend to do that, too. 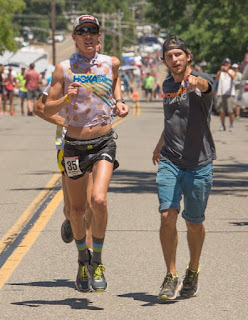 I salute Jim for his bold attempt last weekend, as I salute every single one of us out there who builds up the passion and the determination to tackle ridiculously long distances in difficult environments with no certainty of success, yet who goes at it nonetheless. There will always be some naysaying bystanders to hit someone when they’re down. Often, they will also be the flip-floppers who will turn around and sing the praises of the same person when they actually succeed. I hope their words are as meaningless and inconsequential either way, to the people subjected to them.

After so many hours of training and sacrifice and dedication, ALL Western States runners, from Cat Bradley to Jim to that last person to cross the finish line to those who didn’t even make it to the start but tried, deserve a well-earned congratulations, a recognition of their hard work and some words of encouragement to keep going, to keep pushing the limits and to keep living this life to the fullest.

The bystanders are all the same to me. And I don’t care what they think. 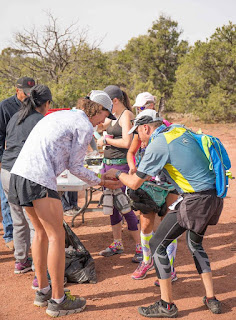 I very rarely come back and edit a post, but I feel like this is important. Myke Hermsmeyer actually sent me a photo (that I didn't know existed!) of the exact moment depicted in my article.

So here it is, Jim being a trail angel to my absolute nobody self, atop Canyon de Chelly :)